Share a memory
Obituary & Services
Tribute Wall
Read more about the life story of Donald and share your memory.

A memorial service for Donald Harris, 78, of Portales, will be held at 2:00 P.M., Friday, November 18, 2022, at Central Christian Church with Don Thomas officiating.

Donald, (Don) Harris was born December 27, 1943 in Lawton, OK, to the home of Marvin C and Gracie Leona (Talley) Harris, and passed away early the morning of November 12, 2022 in Lubbock Tx. Don weas the oldest of 4 children. Don was active in FFA and baseball growing up. While still living in Oklahoma, one year Don had the reserve grand champion heifer, competing with a little jersey heifer against the Holstien heifers. In 1955, the Harris family moved to Carlsbad, NM where he continued to play sports and compete in FFA, showing livestock.

After graduating from Carlsbad High School, Don attended ENMU in Portales, NM on a scholarship to play baseball for the Greyhounds in the catcher position. While attending ENMU, Don met the love of his life, Mary Ann McKnight of Capitan, NM. They were married April 4th 1964 eventually having two daughters, Jana Dawn and Shannon Denise.

Don and Cookie moved to Portales from Gallup NM where they had lived for over 50 years. While in Gallup, Don was a school teacher/coach for Gallup High School. He loved helping student athletes become the best in their sports, even if it wasn’t the sport he was coaching. Don worked at Gurley Motor Co as a repo man and then eventually worked into the sales aspect of the company. He also was licensed to practice law on the Navajo Reservation, just by taking the exam and passing, and only to help in the repo aspect. Eventually, Don moved to Carbon Coal where he worked until the mine closed down and then sold insurance for Mutual of Omaha, where he was the top student in the training that was held in Omaha, Nebraska. Don drove a cross country for ROADRUNNER TRUCKING before going back to teaching in 1992. He once again was teaching and coaching. He was back in his element.

Don was very active in bowling and fastpitch softball, only switching to slow pitch when there wasn’t an age bracket for him to play in. He enjoyed playing in the Labor Day Old Timers Tournament held in Gallup every year. Hunting and fishing were the biggest loves of his life, with numerous bear, bobcat and coyote skins to show for it. Not to mention the elk, barbary sheep, deer and Oryx that hung on the walls. Of all the fishing, ice fishing was his favorite.

Don is survived by his wife of 58 years, Mary Ann (Cookie) Harris. His daughters, Jana Small (Randy) of Portales. Shannon Dulap of Alamo, NM. His grandsons, Cody Small (Jamie) of Portales and Trenton Small (Hope) of Kenna, NM. Granddaughter, Tristen Dunlap (TJ Garcia) of Portales. Great grandchildren – Hannah, Hailey, Hunter and Nora. His sister Jean Patton (James) of Clovis, NM and Thom Oakleif, brother-in-law of Clovis, NM. He was proceeded in death by his parents, Marvin C and Gracie L Harris of Carlsbad. His sister, Lanetta Joyce Oakleif (Harris), Don will be laid to rest at Spring Ranch, Mary Ann’s family cemetery, in the Hondo Valley at a later time.

To send flowers to the family or plant a tree in memory of Donald Leon Harris, please visit our floral store. 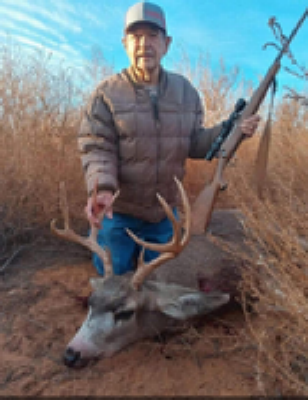