Share a memory
Obituary & Services
Tribute Wall
Read more about the life story of Sylvia and share your memory.

Sylvia Ann (Hughes) McCollum was born on November 7, 1933, in Elida to the home of Fannie Pearl (Jackson) and Arniel Daniel Hughes and was called home to her Lord on Saturday, January 21, 2023, in Clovis.

In lieu of flowers, memorial contributions may be made to your favorite charity.

Sylvia worked in the Portales Junior High cafeteria, was a housekeeper and belonged to the Portales Women's Club and Women's Bowling League.  She loved being surrounded by nature while gardening, camping and picnicking.  Sylvia looked forward to singing gospel songs with members of the Brazos and Portales Valley Churches of Christ.  Visiting with people and living her life as the Lord led her was her mission.  Welcome to your heavenly home, Mom.

She was preceded in death by her husband of 62 years, Roy E. McCollum, her parents, Dan & Fannie Hughes and brothers, Eugene & Leroy Hughes.

Sylvia was a homemaker, caregiver, loving wife, mother, grandmother and friend.  She lived at Retirement Ranch in Clovis for the past 2 1/2 years and her family would like to extend their gratitude to all of the staff for the care and guidance she and the family has received.  You are truly earthly angels.

To send flowers to the family or plant a tree in memory of Sylvia Ann (Hughes) McCollum, please visit our floral store. 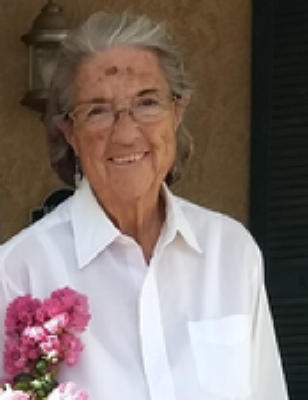